VIRTUAL
Your request has been sent.
We will contact you shortly to confirm your information.
Sorry, there was a problem sending your request.
Please try again.
Reload Page

Choose your type of appointment 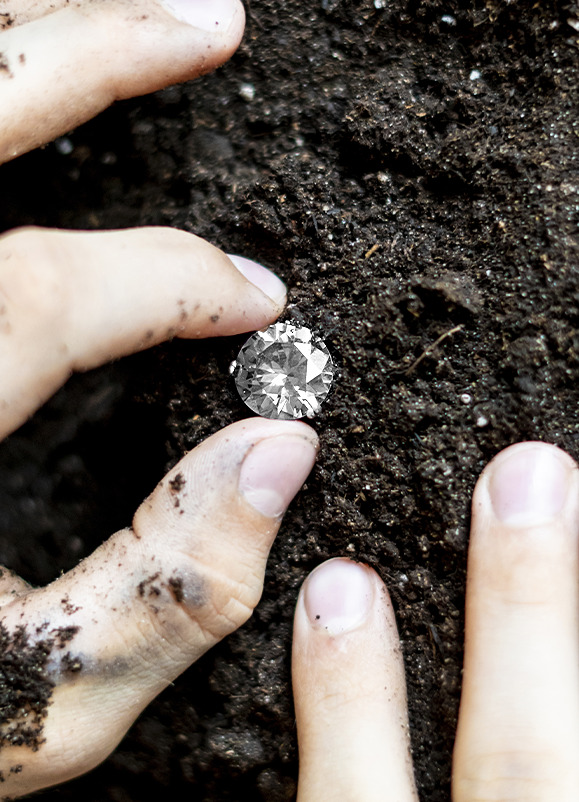 Industry Must Read
Blood Diamonds
Although our insistence on bringing up the topic of Blood Diamonds again here at NOVITA DIAMONDS might seem gratuitous, we have, as you will soon find out, a compelling reason for doing so.
Although you are probably already aware (if not, please read this blog) of the well documented destructive and devastating effects that Blood Diamonds, aka Mined Diamonds, have on human lives and the environment as a whole, we have yet to cover the insidious nature of the industry fully. Many seemingly reputable companies are working hard to mislead well-intentioned customers into purchasing controversy-soaked diamonds, often at much higher prices, disguised as Conflict Free Diamonds.
This disingenuous marketing effort is completely anathema to everything NOVITA DIAMONDS stands for. Even more importantly, it has the potential to undo the hard work that young, ambitious, and environmentally conscious companies like us are doing to push the industry forward.   Potential customers are entitled to the background of what they are purchasing for themselves or their special someone. In addition, customers should be fully aware of whether their money further perpetuates the continued destruction of the environment and the slavery, mutilation and deaths in illegal mines in war-torn countries.

WHAT ARE BLOOD DIAMONDS

To fully grasp why the deceptive practice of passing Blood Diamonds as conflict-free diamonds is so destructive, it is imperative to understand how they got their infamous moniker in the first place. Blood Diamonds are not named after the colour red, which they are not, but for its mining paid in blood spilt by enslaved villagers, many of them adolescents and children, in war-torn countries like Congo or Sierra Leone. These loosely held paramilitaries run by African warlords seize villagers and force them at gunpoint to mine, primarily by bare hands, in search of diamonds. As these slaves eventually collapse by exhaustion or debilitating injury, they are often killed and disposed of to be replaced by newly captured slaves. In addition, as though slavery wasn't bad enough, rich habitats, like forests and riverbanks vital for the survival of many rare species, are systemically destroyed to make the land suitable for mining.
Selling these mined diamonds, often very cheaply because of free slave labour, allows these paramilitaries to unlock funds to purchase military armaments to continue their terrorism, including rape, murder, genocide, and ethnic cleansing, in order to maintain their grip on power. You might be asking who support the proliferation of these conflict diamonds? Unsurprisingly, it's everyone from the established giants of the diamond industry all the way down to small diamond cutters and miners. Indeed, are these big and smaller companies unaware of the Blood Diamonds' human cost and suffering? Of course not. These companies are primarily motivated by profit and little else. To keep their incredibly lucrative money-making scheme running, they have consistently stifled the industry and hindered every attempt to reform until recently. They have always happily bought Blood Diamonds to exploit the artificially low price and easy supply while wilfully ignoring the human cost. But please don't take our word for it; there are plenty of well-researched articles published in prestigious publications exposing everything about the mined diamond industry listed here and much more.
It is understandable to assume that with the growing awareness of the public and their demand for more sustainable and environmentally friendly products, the mining of Blood Diamonds has, if not eliminated, at least been suppressed. However, the truth is not so convenient; Blood Diamonds are not, as of yet, a relic of the distant past. Like many others forced with pressure to change, the Blood Diamond industry simply adapted to be out of public sight. After all, did the African warlords disappear?

A new breed of diamonds called 'Conflict-Free Diamonds' are being heavily promoted by many established companies and newly minted non-profit certification boards to cover up the ugly truth of the mined diamond industry. However, it is nothing more than a marketing stunt to convince empathetic customers to buy mined diamonds without reservations. Despite their claims that all their diamonds are audited to only come from registered mines, all industry insiders know that it is a lie and a marketing scam. Suppose a company or a distributor is able to buy in bulk ridiculously cheap diamonds from conflict regions. In that case, it is in their best interest to never admit to their customers that they are selling Blood Diamonds. Instead, they will do everything in their power to sell them as 'Conflict-Free' with hefty premiums. Diamonds are essentially a collection of a single element- a strong crystal composed of only carbons and therefore untraceable. You can't run tests on pure gold, iron, or any other elements to uncover their origin. Likewise, a diamond mined in Russia is identical to one unearthed in Sierra Leone by a slave threatened with the death of his family if he doesn't fulfil his quota for the day.
The method by which Blood Diamonds slips into the supply diamond supply chain is a fascinating case of a quirk exploited as a loophole. Currently, an excess of 90% of the world's mined diamonds are polished in India. How one country came to dominate this part of the process is an interesting tale on its own. A few decades ago, most diamonds were being polished in Belgium, Israel and India. However, it all shifted to India over time due to cheap labour, enabling Blood Diamonds, which are indistinguishable from any other diamond, to mix in with all the other ones from around the world.

Let's dive into the nitty-gritty details of how the Blood Diamonds enter the supply chain. It is common knowledge among the business circle of the legendary degree of corruption and lack of transparency in India. Everything can be had or done for a price, and the people in charge of the polishers and suppliers and dealers are happy to look the other way as long they keep getting business. Once a parcel, which contains thousands of diamonds, arrives in a polishing house, it is opened and mixed with other similar packets. Now we have this giant bowl of diamonds of different origins all mixed up. Once every diamond is polished and sent to a grader, there is simply no possible way to guarantee a diamond's origin. Any company or organization that provides a certificate of origin or claims with certainty that their diamond is from a 'Conflict-Free' mine in Botswana is simply selling you a false promise. The certified diamond could, just as easily, be from a conflict area in Congo. Even with their claim of a strict "Chain of custody", it is simply not financially feasible to process diamonds individually one at a time with a certifier overlooking every step of the way. Remember, 90% of the world's diamonds are batch-processed in the thousands, not hundreds, in India of all places, a country without the best reputation for transparency.
If a company sells mined diamonds, they are not genuinely committed to 'conflict free' diamonds. The only actual conflict-free diamonds are those produced by engineers and scientists in a lab. Equally, anyone involved in the selling of mined diamonds is complicit in sustaining the continued existence of Blood Diamonds and are at least indirectly complicit in the death and suffering of countless innocents, not to mention the devastating loss of forest critical to the survival of endangered primates such as Eastern lowland gorilla and numerous other species.
NOVITA DIAMONDS was built on the promise of never dealing with mined diamonds. We, therefore, refuse to partake in an industry rife with corruption and risk selling even one Blood Diamond to our customers. Our firm commitment to exclusively sell only lab grown diamonds to support the environment and empower our customers who, we believe with all our heart, deserve the choice and freedom to buy affordable diamonds for themselves and their loved ones without having to worry if their symbol of love is marked by the suffering of others.

Thank you for requesting an appointment at Novita Diamonds.

Your request has been noted and you will be contacted shortly by one of our friendly staff to finalise your appointment.